Did you know you can make Vegan Royal Icing from chickpeas? I finally tried it and it works.

JUMP TO RECIPE | PIN IT for later

Few weeks back I made Vegan Sugar Cookies. Today I’m going to show you how to make royal icing without egg whites with aquafaba.

Who would have thought that chickpeas, an annual legume can be used to make something sweet? I like chickpeas and I use them in salads or eat them plain with apples. They are also the main ingredient in hummus.

Little did I know that brine from chickpeas can be used to make Vegan Royal Icing and Vegan Sugar Cookies. Isn’t that awesome?! So next time you drain chickpeas be sure save the brine. And you can also freeze it for later.

Make sure to drain the chickpea brine through a fine mesh sieve. Just in case there are some bean bits in the aquafaba. You don’t want those in your vegan royal icing.

Into the aquafaba add cream of tartar and whip until foamy. Then you can add all of the powdered sugar all at once. Using a wire attachment beat on low speed until thick. I also add little bit of white food coloring while it’s mixing.

HOW TO COLOR ICING

To flavor my royal icing I like to add with Vanilla, Lemon and Almond extracts.  I know it seems like an odd combination of flavors but it really works. Of course, nothing is set in stone and you can experiments with other flavors. However I’d recommend that you stick with Vanilla Extract. You can then add other flavors of your choice.

I use gel food colors to color royal icing. Check with the manufacturer if you have further questions about the contents of gel food colorings you are using.

HOW DO YOU BAG ROYAL ICING ?

To bag the the icing I mostly use disposable piping bags bags and a tape sealer to seal them. Make sure to get the tape too, as the sealer doesn’t come with it. 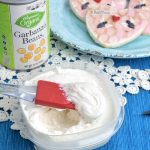 Store in the fridge, for up to 5 days.

CAN I USE HOMEMADE CHICKPEA BRINE?

For the best results use brine from drained store bough chickpeas. It’s difficult to control concentration of homemade chickpea brine.

MY VEGAN ROYAL ICING IS NOT DRYING, WHAT HAPPENED?

PIN IT for later

This post contains amazon affiliate links that earn me a small commission, at no cost to you. I only recommend products that I use and love. Learn more about my affiliate policy here.